This will be the first time for my blog to host the Hermès SS16 Fashion Show Live here on my blog.

The Hermès men’s show for the spring-summer 2016 collection will be held on June 27th at 8pm (Paris Time). You also can visit the website Hermes.com/defile for the show.

PRESS PLAY TO ACTIVATE THE SCREEN

i/ɛərˈmɛz/) is a French manufacturer established in 1837, today specializing in leather, lifestyle accessories, perfumery, luxury goods, and ready-to-wear. Its logo, since the 1950s, is of a Duc carriage with horse. Nadège Vanhee-Cybulski is the creative director.[2][3].

Hermès sales are composed of about 30% leather goods, 15% clothes, 12% scarves, and 43% other wares.[4] The company licenses no products and keeps tight control over the design and manufacture of its vast inventory.[7]

The family company is very attached to its old-fashioned business model and rejects mass production, assembly lines, and mechanization. Hermès goods are almost entirely made in France by hand in middle-sized workshops (“Ateliers Hermès”) with an emphasis on quality manufacturing. Indeed, Hermes claims most items are fabricated from beginning to end by one person only, which is supposed to be a guarantee of the quality and uniqueness of Hermès products.

In 2012, Hermes retail outlets changed its policy regarding returns and exchanges of products. Consumers may only exchange items within ten days of purchase, and only for another color variant of the original purchase. No other post-purchase exchanges are permitted and refunds are never offered, regardless of the consumer having a receipt.

The scarf or carré was introduced in 1937.[6] One of the first, which was a print of white-wigged females playing a popular period game, was a custom-made accessory named Jeu des Omnibus et Dames Blanches.[6] Hermès oversaw the production of its scarves throughout the entire process, purchasing raw Chinese silk, spinning it into yarn, and weaving it into fabric twice as strong and heavy as most scarves available at the time.[6]

Contemporary Hermès scarves measure 90 cm × 90 cm, weigh 65 grams and are woven from the silk of 250 mulberry moth cocoons.[14] All of the hems are hand-stitched. Scarf motifs are wide-ranging, Two silk-scarf collections per year are released, along with some reprints of older designs and limited editions. And two collections per year are introduced in a Cashmere/silk blend. Since 1937, Hermès has produced over 2,000 unique designs; the horse motif is particularly famous and popular.[14] The seen-everywhere “Brides De Gala” version, introduced in 1957, has been produced more than 70,000 times. An Hermès scarf is sold somewhere in the world every 25 seconds; by the late 1970s more than 1.1 million scarves had been sold worldwide.[7]

The scarves[7] have been worn by several celebrities such as:

Introduced in 1949, men’s neckties, in a huge array of motifs over the years from bunnies to confetti, have been made from the same silk material as the scarves and are, likewise, very expensive.[15]

Partnership with the Tuareg

For years, Hermès has partnered with Tuareg tribesmen in silver jewelry. The Saharan nomads‘ traditional motifs are often mirrored in various Hermès products, including scarves.[16] 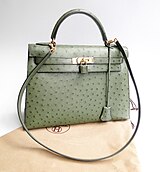 Hermès is known for its handmade luggage and handbags. One bag might require 18 to 24 hours to produce. The construction of each Kelly bag, for example, requires 18 hours to fully realize.[6]Hermès’s leathers come from all over the world. Customers may currently wait from six months to one year for delivery of one of the house signature bags. Incidentally, should Hermès’s leather goods require repair, owners can bring an item to any Hermès store, where it will be shipped to the Atelier Hermès in Pantin, near Paris, for repair or reconditioning.

Another famous Hermès handbag, the “Birkin“, was named after English actress Jane Birkin who lives in France. After a chance encounter with Jean-Louis Dumas, she complained that her “Kelly” bag was not practical for everyday use. Consequently, he invited her to France where they co-designed the bag. Birkin has since stopped carrying her namesake bag, saying it contributed to her tendonitis.[citation needed]

Since 1951, the company has created several scents for both men and women. This is a partial list of over 30.

Belonging to the group is the crystal glass manufacturer Saint-Louis, the oldest crystal company in the world. Since its origin in 1586, Saint-Louis has drawn its inspiration from the great decorative periods of the 19th and 20th century, from Restoration to Modern Style, going through Napoléon III, Art Nouveau and Art Deco – the true essence of its identity. Saint-Louis became one of the Hermès Group Métiers in 1989.[17]

In the early 2015, in February, Hermès has announced an increase of its turnover of 9.7 percent, which represents more than 4 billion in sales. [18]

Error: admin-ajax.php test was not successful. Some features may not be available.

Please visit this page to troubleshoot.

You can find out more about which cookies we are using or switch them off in settings.

This website uses cookies so that we can provide you with the best user experience possible. Cookie information is stored in your browser and performs functions such as recognising you when you return to our website and helping our team to understand which sections of the website you find most interesting and useful.

Strictly Necessary Cookie should be enabled at all times so that we can save your preferences for cookie settings.

If you disable this cookie, we will not be able to save your preferences. This means that every time you visit this website you will need to enable or disable cookies again.